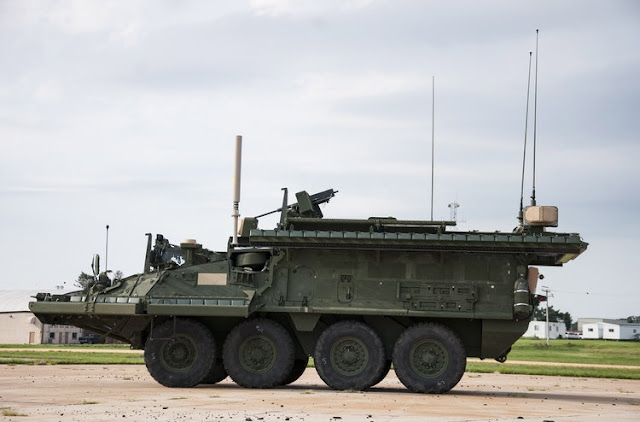 The only U.S.-based Active Protection System solution for Army combat vehicles is in the midst of government testing, according to the company’s president.
Herndon, Virginia-based Artis LLC’s Iron Curtain was selected by the Army to be qualified as an interim solution for the service’s Stryker combat vehicle roughly a year ago, Keith Brendley told Defense News in an Oct. 3 interview.
The Army determined it needed APS solutions to fill an immediate need while it develops its Modular Active Protection System (MAPS). The service quickly selected three vendors to supply commercially available APS systems to qualify them on its fleet of combat vehicles.
Israel’s Rafael was picked to supply its Trophy APS system, already deployed with the Israeli military, for the Abrams tank and another Israeli company IMI is supplying its Iron Fist for the Bradley fighting vehicle. 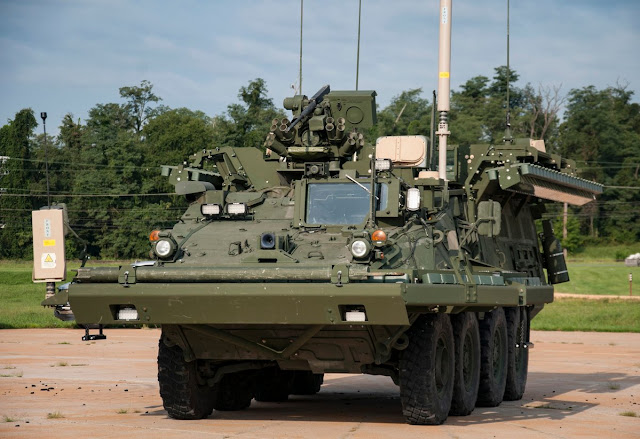 The Army recently made a decision to field the Trophy system on a brigade’s worth of Abrams that will be deployed to Europe.
Qualifying APS systems on the other two vehicles are behind the Abrams because of funding availability.
While the Bradley solution is farthest behind because the vehicle is the most challenging when it comes to adding systems onto the platform, Stryker with Iron Curtain has moved into the governmental characterization phase.
The Bradley team is still in the process of tuning the system on the vehicle and is moving through contractor testing.
Iron Curtain’s contractor testing “went very well and the evidence of that is we are proceeding on to government testing,” Brendley said, adding the testing has been ongoing for a month.
Brendley said, so far, the government testing has gone “very well” and a decision on a way forward by the Army Requirements Oversight Council (AROC) will likely happen early next year.
There is one Iron Curtain-clad Stryker at Aberdeen Proving Ground, Maryland, and one at Redstone Arsenal in Huntsville, Alabama.
Artis was founded by Brendley in 1999 along with two other scientists as well as a few additional people. Artis was initially an acronym that stood for Advanced Real Time Information Systems.

US Army leaders have revealed their intention to speed up the acquisition of active protection systems for the M1A2 Abrams tank, with the service now moving to the next stage of equipping an armoured brigade.
Service officials used this year’s AUSA exhibition in Washington DC to reveal more details on their testing of the Israeli-developed Trophy APS, which was approved for acquisition in the last few weeks and has been described as the army’s ‘worst kept secret’.
Col Glenn Dean, the programme manager responsible for both the Stryker Brigade Combat Team and APS acquisition, told journalists that the fielding was planned for 2020, but that could be sooner.
‘The drum beat is to go very quickly,’ said Dean.
It took the army six months to develop so-called 'B-kit' technologies that would allow the system to be installed. The army’s intention was to then install and ‘characterise’ the system, and assess whether industry claims regarding their APS capabilities were true.
The testing itself was carried out in Michigan as well as Redstone Arsenal in Alabama, where live-fire trials took place. Before the live-fire trials, industry contractors were allowed to ‘tune and calibrate’ their solutions and then the systems went into performance characterisation.
‘This wasn’t on a test rig, it wasn’t a fly by shot, we were shooting actual threats at actual vehicles,’ said Dean, adding that he ‘tried to kill an Abrams’ about 48 times and failed.
Video footage of the live-fire testing was shown, however the projectile, platform, and interception were all obscured due to its classified nature.
The testing also ensured that the installed system did not affect the performance of electrical systems or the turret, including how the 120mm main gun fired. Dean explained that Abrams crews successfully fired the gun ‘in challenging conditions’ while fitted with Trophy.
Overall, Trophy ‘exceeded our expectations’, said the US Army leadership.
Speaking on the danger to dismounted troops when an interceptor is fired from the vehicle, Dean told Shephard that what the army had seen so far was that APS was less hazardous to dismounted soldiers than explosive reactive armour.
‘You’re going to have a bad day if there is an active protection system or not,’ said Dean. ‘[But] it appears they would be better off with an APS.’
Abrams will now move forward in phase two that will see additional testing, with more challenging scenarios that could include multiple Abrams fitted with Trophy to see how they perform. The third phase will be the fielding of the system to an ABCT.
There will also likely be a deeper integration that would see additional functionalities, including a ‘slew-to-cue’ function being introduced that would allow weapon systems to be pointed in the direction of the detected threat.
The US Army’s approach to fielding an APS capability has been significantly different from its usual strategy of setting out a detailed requirements document and trialling industry submissions against an extensive set of test points.
‘We didn’t start with a requirement, we started with a demonstration of capability,’ said Maj Gen David Bassett, program executive officer for ground combat systems. ‘That might be a new way of acquisition.’
Officials confirmed that the M2 Bradley and Stryker would go through the same APS characterisation process with IMI Systems’ Iron Fist Light and Artis Corporation’s Iron Curtain, respectively, although they are behind the roll out of Trophy.
‘The maturity of those systems might not be as high as advertised,’ said Dean.
The M2 Bradley with Iron Fist is now going through the ‘tuning’ process with contractors and will begin the characterisation phase in the next quarter, which will then be followed by the acquisition process. One challenge for Bradley has been the small turret as well as power generation, with the army having to take elements from the M2A4 upgrade to ensure that the APS can be installed.
‘That power architecture and software architecture on Bradley has been very challenging,’ said Dean.
Iron Curtain, a distributed APS system, has now began its characterisation phase with the ‘contractor comfortable with tuning’. Live fire trials have begun at Redstone Arsenal and that process is around 25% complete, according to officials.
Источник 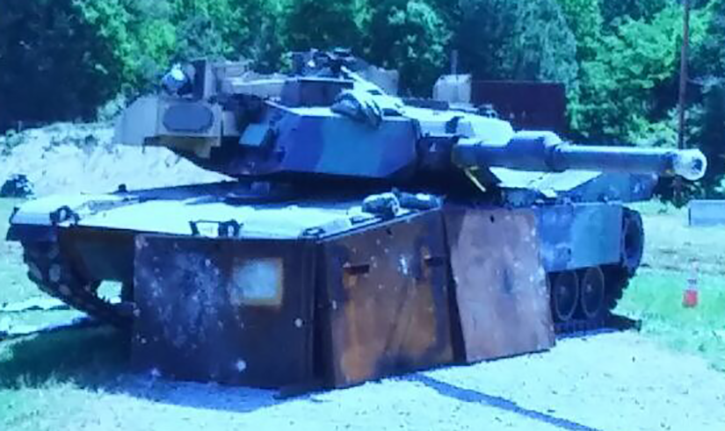 After years of evaluations and experimentation with active protection systems (APS) technologies, the US Army finally moves fast to equip its M-1A2 SEPv2 main battle tanks with lifesaving APS – Israel’s TROPHY was selected, realizing it is the only system of its kind that has proved its worth in real combat. M-1A2SEPv2 is the latest operational variant of the M-1 Abrams tank. These systems are expected to enhance the operational effectiveness of the U.S. main battle tank, enabling tank formations to become more survivable and decisive against anti-tank threats.
The U.S. Army has recently received the latest modernized version (SEPv3) of the tank and has recently awarded the original manufacturer of the tank, General Dynamics Land Systems (GDLS), to propose new upgrades for a follow-on SEPv4 variant.

Relying on non-developmental technology, the integration of Trophy on the M-1A2 SEPv2 took only six months, and in the evaluations, its performance TROPHY exceeded the Army expectations. Following the successful completion of the first phase, the program moves to the next testing phase. Since Trophy is an operational system that has proved its worth, the Army is not waiting for the completion of this second testing phase and simultaneously enter production, to meet the Army’s tight fielding schedule.
The acquisition of the TROPHY brigade set for the M-1A2 SEPv2 is limited to one brigade set and is managed under the modification and support contract of the Abrams tank as an urgent material release. The U.S. already has one armored brigade deployed in Europe on an annual rotation; the APS-equipped brigade is expected to remain in Europe on a permanent basis. Future equipping decisions will be taken under the APS ‘Program of Record’ after the system integrates the forthcoming Modular APS (MAPS) architecture, that will enable the Army to ‘plug and play’ new, emerging detection and defeat technologies. The current system employs four IAI Elta ELM-2133 Windguard radars According to Rafael Advanced Defense Systems, the system’s developer, and its US team-member DRS Technologies of the Leonardo Group, TROPHY is designed with the ability to accept future technologies and capabilities.
The Israeli Ministry of Defense and Defense Forces put TROPHY through a four-year safety certification process before approving its operational use aboard the Merkava Mk4 tank in 2010.